Last week in school, we did something really fun. Today was scientists in school! Every year our school does this thing called Scientists In School. You can probably guess the concept, scientists come to school. Usually, some parents come to school and volunteer, and because of the pandemic no one is in school so we all got on a Google Meet, and so did the scientist. This time It was called As A Matter Of Fact because we were learning about the 3 states of matter solids, liquids, and gases. Her name is Dana by the way. The goal that we needed to do at the end was to figure out what the mystery powder was. The first thing we did was that we had to see if our materials would dissolve in water. Firstly, when we put flour in water the water was cloudy which meant it didn’t dissolve. When we put the Epsom salt in the water it didn’t really dissolve because it was chunky. The baking soda did though! We did a few small experiments along the way but I am not going to mention those because they are not very interesting. We made cabbage water by mixing cabbage powder and water. We took a bit of Epsom salt and a bit of Vitamin C and some cabbage water and at first, it turned pink, and after a bit of waiting it turned red which I thought was really cool, but do you want to know what’s even cooler? We did the exact same thing except instead of Epsom salt we used baking powder, and it turned blue and started bubbling! It was so cool! Lastly, we still had to figure out what the mystery powder was. It looked like flour so we put some in water and it didn’t dissolve so we thought it was flour, but some people thought that it was baking soda so we put the powder in cabbage water and it turned blue and bubbled, so we came to the conclusion that the mystery powder was flour and baking soda. It was super fun. At the end, I mixed all the rest of the ingredients together but all it did was bubble, but some people said it exploded! 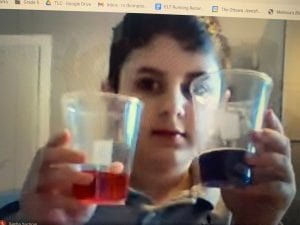 1 thoughts on “Scientists In School”